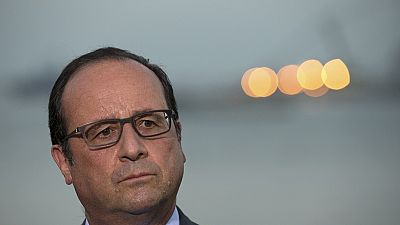 French President Francois Hollande met with his Egyptian counterpart President Abdel Fattah al-Sisi in Cairo on Sunday, at the start of a two-day visit, with security and economic cooperation on the menu.

Hollande and Sisi are expected to hold discussions on the Middle East crisis including the war against the Islamic State group and the Israeli-Palestinian conflict.

Hollande landed in Cairo in mid-afternoon from Lebanon, which was the first stop of a tour in the Middle East, he will also visit Jordan after two days state visit to Egypt , according to an AFP journalist at the airport.

The question of human rights will be in the background. Hollande has been among Sisi’s strongest supporters in Europe, since the former army chief overthrew his predecessor and launched a bloody crackdown on protesters in 2013.

On the eve of the visit, human rights groups including Amnesty International had criticised what they called France’s “deafening silence” on rights violations in Egypt.

Since the overthrow of president Mohamed Morsi in 2013, police have waged a bloody crackdown on Islamists that has killed more than 1,000 protesters.

The crackdown has spread to secular and left wing dissidents who had supported Morsi’s overthrow but then turned on Sisi.

Meanwhile, jihadists have staged an insurgency based in the Sinai Peninsula that has killed hundreds of soldiers and policemen.

The Islamic State group’s Egypt affiliate has also claimed responsibility for bombing a plane carrying Russian holidaymakers over Sinai last October, killing all 224 people on board.

Sisi, who won a presidential election in 2014, has manoeuvred his country into being a cornerstone in the fight against the Islamic State group, which a US-led coalition is battling in Iraq and Syria.

IS has taken over the city of Sirte in neighbouring Libya, more than five years after French-led air strikes helped rebels there defeat dictator Muammar Gaddafi’s regime.

For many governments in the West that initially condemned the overthrow of Morsi – Egypt’s first democratically elected president – the fight against jihadists has became the main concern rather than pushing democracy.

For France, Egypt has also become a key market, especially for military hardware.

After his Cairo trip, Hollande will on Tuesday visit Jordan’s Prince Hassan air base, where French aircraft taking part in the coalition battling IS in Syria and Iraq are stationed.