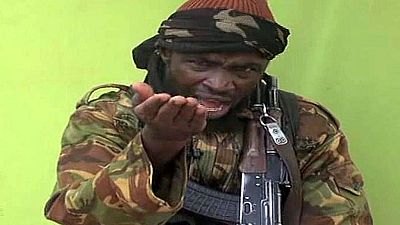 Boko Haram leader, Abubakar Shekau, appeared weak in a new video released on Thursday, cutting short rumours about his death yet announcing that his end is near.

“For me, the end has come,” Shekau said with a pale face in the poor quality video posted on Youtube.

“May Allah protect us from evil… I thank my creator,” Shekau said slowly in Hausa and Arabic, in a tone devoid of cynicism that characterizes his persona.

He announced in March 2015 Boko Haram’s allegiance to the Islamic State group (IS). Unlike previous videos of the Nigerian Islamist group posted late 2014 and early 2015 which had very good quality images, carefully shot, resembling those of IS, this new video is badly shot with poor quality.

Shekau did not make any reference to the IS, and used the original name of Boko Haram, “Jama’atu Ahlis Sunna Lidda’awati wal-Jihad” which literally means “the people engaged in spreading the teachings of the prophet and jihad “.

The location and the time the video was shot is unknown and the Nigerian military said it was “being authenticated”.

“When you watch Shekau’s video, the message is clear: It is over,” responded a military source in Maiduguri, Borno State capital in northeast Nigeria.

“For this arrogant and boastful terrorist speaking in a voice as soft and cozy, this shows that he has been defeated,” he said.

“This is a farewell video. He told his fighters that they can say goodbye to their illusory Islamic State and disarm. He knows that in view of the advances of the Nigerian army, our troops will soon find them.”

The army has also issued a statement in which it declares to be “aware of the video subject to an investigation to ascertain its authenticity.”

Some experts question the authenticity of the video, pointing at a very dark image that does not clearly distinguish the features of Shekau, and the use of the old name and the old logo of Boko Haram.

“If the message is authenticated, it raises interesting questions,” said Ryan Cummings, a specialist in security issues in Africa.

“This could be a sign of a change of leadership within Boko Haram, and even a change of strategy,” he added.

Shekau, with a thick beard, stood in front of a pale green background and a black jihadist flag was embedded next to him.

Nigeria last year led a major offensive with the support of Chad, Niger and neighboring Cameroon, which helped in the takeover of Gwoza, the seat of command of Shekau, and most of the towns and villages of the region which had fallen into the hands of Boko Haram.

The Nigerian army has already announced several times the death of Shekau, who assumed leadership of Boko Haram after the execution of its historic leader Mohammed Yusuf by the police in 2009.

Watch the video below.