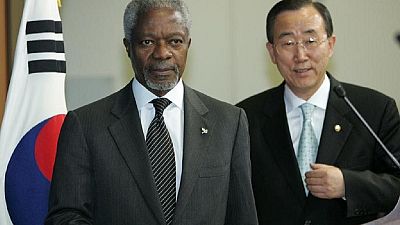 A former Secretary General of the United Nations (UN) Ghana’s Kofi Annan, says that it is time that a female ascends to the high office of Secretary General, an office that has been occupied by males since 1945.

Kofi Annan was speaking in an exclusive interview with France24’s Katerina Vitozzi on the sidelines of an environmental conservation conference in Ghana, under the theme, ‘Forest for the Future.’

He reiterated that the view that the next Secretary-General after the incumbent Ban Ki-moon had to be a female was one championed by the ‘Elders,’ a group of eminent world leaders which he was a part of.

I think first of all, let me say that I'm part of the 'Elders' and we have a position that after 70 years the time has come that we see a woman Secretary General in the post.

‘‘I think first of all, let me say that I’m part of the ‘Elders’ and we have a position that after 70 years the time has come that we see a woman Secretary General in the post. When she arrives, I trust the member States will support and work with her,’‘ he stated.

Link to my interview with the indefatigable KofiAnnan; says ‘time has come’ for a woman to lead UN https://t.co/IfQuZVyNYo

The former UN chief also spoke about the perfect blend of qualities that was sure to guarantee success to whoever rose to the post.

‘‘There is often a debate as to what is needed at the UN, a Secretary or a General, and I had maintained that the Secretary-General has to be both, a General when it is necessary and provide secretarial support when it is required.

[And] I am sure the new Secretary-General when she arrives will play those two roles very effectively and i will urge the member States to support her in that rôle,’‘ he concluded.

Who is the United Nations Secretary-General (UNSG)?

The UNSG is the head of the UN Secretariat headquartered in New York. He/she also serves as leader and de facto spokesperson of the body.

The position is currently held by South Korea’s Ban Ki-moon who took office on January 1, 2007 and was reelected for a second term on June 21, 2011. His tenure expires this year and the UN General Assembly is expected to appoint his successor later this year.

The position has been occupied by eight different persons since it was instituted in 1945, the first being Norwegian Trygve Lie between 1946 and 1952.

Two Africans have so far risen to the high office of UNSG, Egyptian Boutros Boutros-Ghali (1992 – 1997) who served one term after the United States vetoed his second term bid.

He was however replaced by Ghana’s Kofi Annan, who successfully had two terms. Annan is currently an international mediator and passionate advocate for poverty reduction, food security and environment working with his Swiss based foundation.