On a normal day, around a dozen young girls line up against a cement wall, touching their hands to their faces in prayer before boxing for the day’s practice.

The Pak Shaheen Boxing Club in Lyari, a packed Karachi ward known more for its internecine gang warfare than for breaking glass ceilings, is playing host to these ambitious young women.

“I have been training since I was a child,” said Urooj Qambrani, who is 15. “Inshallah, I will become a national and an international boxer.”

Girls aged 8 to 17, go to the club after school to practice their jabs, hooks and upper cuts for hours in hope of winning something huge one day.

“Boxing is in our blood. My two uncles are international boxers, and my father is a coach. He is giving us full training,” she said.

The growth of the sport has however been dogged by a lack of equipment and adequate facilities.

But all hope is not yet lost as major improvements have been recorded.

Last October, the Sindh Boxing Association organised a camp for female boxers, the first time a government-supported event for women was taking place. 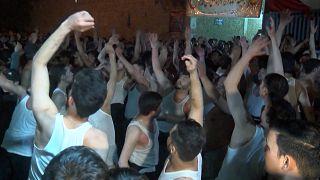