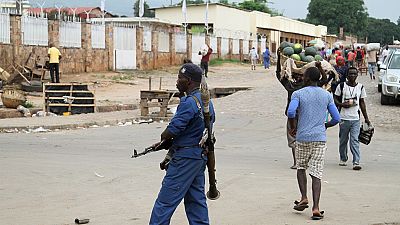 Two explosions in Bujumbura on Monday have killed at least two people and injured a dozen.

The attacks occured occured in the morning as the country awaited the arrival of UN Secretary General, Ban Ki Moon.

“After the grenade thrown at the market Kwa Siyoni in the district of Ngage (north of the capital) killed one person and wounded seven, a second grenade exploded later at the Kamenge market (north-east) killing one person and wounding two,” Freddy Mbonimpa, Mayor of Bujumbura told news agencies.

There was no causality in a third explosion in the neighbourhood of Buterere.

“Calm has prevailed in the capital for several days but the terrorists are launching their criminal operations to show that they are there as Burundi welcomes an August guest,” Mbonimpa said.

Authorities have announced that three men have been arrested in connection with these attacks.

Governor of the Mwaro province, Jean-Marie Nyakarewa, told pressmen two people were killed on Sunday night during an attack attributed to armed criminals.