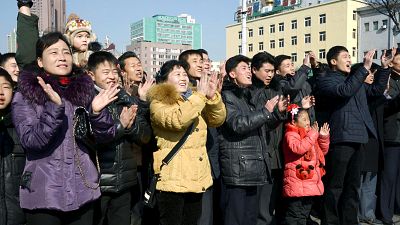 KCNA provided videos showing party and army officials, as well as students and residents of the capital, gathered in the square to watch parades, dances and fireworks.

The move by the North Korean government to launch the satellite has left many of its citizens brimming with pride.

“The successful launch of the satellite “Kwangmyongsong-4” gave the people and the army great courage and pride. This has showed that our country can do what it is determined to do. This event is an historical one which can only be conducted by our great people and the army who are holding our dear respected marshal Kim Jong Un in high esteem,” said Kim Nam Chol.

Major scientific developments in the Korean country has been attributed to hardwork from the most learned.

“The successful launch of earth satellite “Kwangmyongsong-4” is showing off our great power of science and technology. Like the scientists and technicians who launched the satellite, I will do my best in my studies to contribute to my country,” said Kim Ju Ok, a student.

The U.N. Security Council has strongly condemned the launch and promised to take action. United States of America has vowed to ensure the 15-nation body impose “serious consequences” on North Korea as soon as possible.