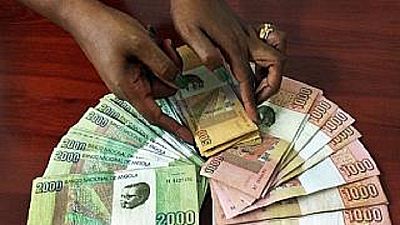 It appears the woes of the Angolan currency, the kwanza, might not be ending anytime soon.

The currency of Africa’s second biggest oil producer lost ground to the US dollar in September 2015, continuing a trend which started in mid-2014.

There is a strong demand for the dollar. It becomes so difficult to find people willing to change their kwanzas at exorbitant prices

In the wake of tumbling oil prices on the global market, the kwanza is free falling as the country’s major source of income – oil sale – is affected by a global decline.

The black market has become the go to place for Angolans who want to change their money into a more stable currency.

The AFP reports street vendors display exchange rates of 335 kwanza to the dollar instead of the official rate of 155.

“There is a strong demand for the dollar. It becomes so difficult to find people willing to change their kwanzas at exorbitant prices” one vendors told the AFP.

Despite assurances by the Govenor of the National Bank of Angola, José Pedro de Morais, in December last year that there was “no dollar crisis”, the currency was devalued by 15 percent a week later.

The kwanza was on January 4 2016 devalued by another 13 percent to trade around 155 per US dollar.

For some analysts, the devaluation of the Kwanza is not surprising given the decline in oil prices and the pressure on the Angolan government’s foreign exchange reserves.

This development is also affecting traders, especially those who import their goods as prices of the goods they import have multiplied in some cases by five folds.

Businessman Tino Mario Salomoa told the AFP it has become difficult to make trips abroad to purchase goods from wholesalers.

The resultant effect is that prices of goods on the local market have also soared. Mobile phones which could be bought for about 5,000 kwanza previously are now selling for between 15,000 and 17, 000 kwanza.

The depreciating currency is also impacting inflation which shot up to 14.27 percent in December 2015 from 13.29 percent recorded in November the same year.