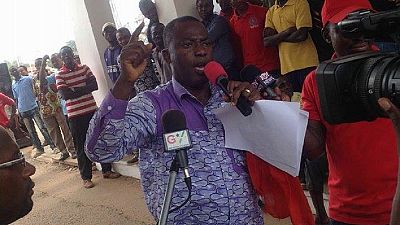 A union of teachers and education workers in Ghana has pulled through its threat of striking to express displeasure with government to meet their demand of increasing salaries of public university staff.

The Teachers’ and Education Workers’ Union (TEWU) stopped work on Monday, January 18, 2016, as a follow up to Ghana’s Fair Wages and Salaries Commission’s reluctance to honour its promise of a fair distribution of salaries between junior staff and senior staff of public universities.

This industrial action comes ahead of a scheduled nationwide labour union demonstration on Wednesday, January 20, 2016 against hike in fuel and utility prices.

Peter Lumor, Chairman of TEWU, in an interview with Accra-based media, Joy News, said there was a consensus, after three years of meetings, to address the salary issues by “bridging the gap between senior and junior staff.”

The head of the Union said since June 2015, the Fair Wages and Salaries Commission has not called for a meeting to finalize the agreement and attempts to reach them in November last year and January this year were not fruitful.

Peter Lumor indicated that their decision to strike can only be overturned when the commission resolves the salary issue. The commission has however declined to comment.

On Wednesday, Ghana’s labour union, Trades Union Congress (TUC), is expecting over 500,000 Ghanaian workers in the streets nationwide to demonstrate against the over 50% increment in electricity and water tariffs and the 28% increase in petroleum prices.

The last nationwide demonstration held by the TUC was in July, 2014, calling for better economic conditions for Ghanaians. Thousands joined in that demonstration.