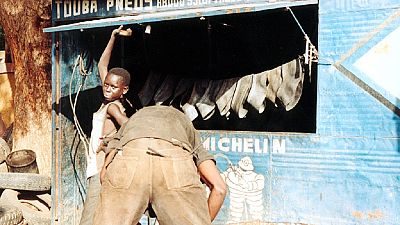 Women in Senegal are fighting stereotypes by becoming auto mechanics

The automotive industry is a male-dominated empire, but two women in Senegal have defied the odds by opening the first garage in the West African nation.

Fatou Sylla and her cousin, Fatou Kamara,are the owners of the Fatou Fatou Mercedes garage, based in the country’s capital, Dakar. They have eight employees and say their business has been running smoothly.

However, they admit facing a number of challenges in the line of their work.

“Being a woman, especially who runs a garage is not easy. This is because men do not quite easily accept seeing a woman who is a boss in a male-dominated environment . But for me, its not a question of being feminine or masculine. The essential thing is to prove and know what we do. It’s not easy, but we must do it, “ says Fatou Sylla.

Before engaging in the business, they enrolled in a technical school for three years to learn more about car-engine problems mostly found in West Africa. This was followed by the two working as mechanics in repair garages.

Now with more than 15 years experience in the industry, they are well respected after facing criticisms when they first opened their garage.

“In 1995, in Africa, and particularly here in Senegal, people were not used to seeing women take mechanical jobs. Sometimes when you walked by, women laughed at you, the men looked at you differently. But now we have influenced other women who are mechanics. Women are often in the fields of hairdressing, pedicure, manicure, but I am inviting them to embrace this profession as it is noble, “said Fatou Camara.

I'm not a fan of #SpiceGirls but Girl Power to the Women in South Africa Senegal for opening a female mechanic only garage. #mechanic

Other female garages have also been opened in other parts of the country, like “Femmes Autos,” which has 35 engineers, including 10 women. Among them is Anna Lucienne Gaye, who is passionate about her job.

“Mechanical engineering is a profession that always fascinated me. I always liked to do odd jobs especially male jobs. I had friends who were mechanics and I always wanted to be like them. My hope today is to have my own garage, open a spare-part store, create jobs and train people, especially the unemployed,” said Lucienne.

Women in Senegal have traditionally been expected to stay at home and bear children. Very few are encouraged to work or start their own business.

Senegal’s education ministry is trying to reverse the trend by adopting a gender approach in the policies of vocational training institutions.

Many women have been deterred from entering the industry due to discrimination. But for Fatou Sylla and Fatou Kamara, their roles will hopefully continue to inspire a new generation of girls to pick up a torque wrench and spearhead advancements in the auto industry.