Pakistan: Blast leaves at least 14 dead near a polio center 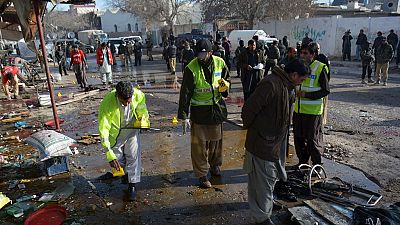 At least 14 people have been killed and 20 others injured in a deadly bomb blast, outside a polio center in Quetta, Pakistan, on Wednesday.

The blast blew up a police van, that was carrying, security officers, who were headed to guard the center, but who were met with their untimely deaths.

Taliban and other terrorist organisations, have often targeted children immunization centers in the country, this being the latest, after polio campaigns were recently relaunched in the city.

Salute to all the polio workers in Pakistan who continue their efforts despite frequent attacks on them & their colleagues. #Respect #Quetta

Pakistan and neighbouring Afghanistan, are the only two countries in the world, where polio is still endemic but where militants still believe that polio vaccination is a western conspiracy to sterilize children.

At least 14 dead in blast at Pakistan polio centre https://t.co/SLdsvE5RQt

Two militia groups, Jundullah and the Pakistani Taliban have so far claimed responsibility for the bomb blast.