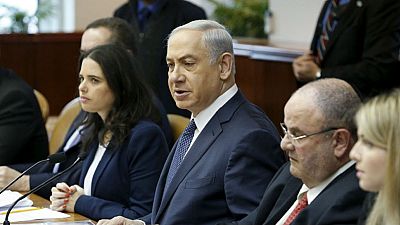 Netanyahu denounced the attack by a shooter suspected of being an Arab Israeli and pledging a crackdown on crime in that community.

He also promised more police posts will be built and additional law enforcement put in place.

Security forces, the Shin-Bet, the police continue searches for the murderer from Tel Aviv

PM Netanyahu visited the murder scene in Tel Aviv and was briefed on the investigation
https://t.co/FLn083VNKr pic.twitter.com/50GA1fhHzM

Netanyahu who had visited the place of the attack to lit candles, vehemently reproached the malefactors. “A terrifying murder took place here yesterday and it incomprehensibly showed the cruel intension of the masterminds.”

The head of state assured the Israeli that efforts were being made to apprehend the culprits.

“Security forces, the Shin-Bet, the police continue searches for the murderer from Tel Aviv. A huge effort is under way, with many troops, incessant intelligence efforts. This effort is also done with the assistance and help by Israel’s citizens, who show vigilance and responsibility.”

Arabs make up 20% of the Israeli population of 8.4 million and rarely take part in opposing the Israeli administration despite the Palestinian’s rampant confrontations.

Many violence have been carried on by many Palestinian Islamist groups that breach the destruction of Israel.

Israel has been keen to monitor all possible areas of attacks with the growing threats from the Islamic state in many countries.