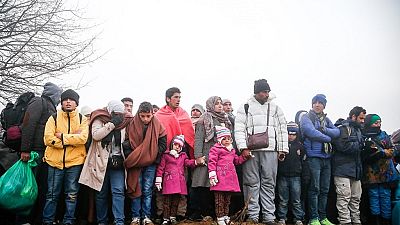 More than 1,000 Syrian refugees have been stranded for four days at a gas station 30 kilometers away from the Greek-Macedonian border.

This is as a result of worsened weather in the waters off southeastern Greece as the number of refugees taking boats to Greece reduced significantly.

The refugees were taken to Greece in more than 10 buses on Wednesday morning. Iraqi refugee, Mohammed, said they arrived at the gas station on December 18, 2015.

We’re waiting for the train, there is a problem with the train.

“We’re waiting for the train, there is a problem with the train,” said Syrian refugee Ahamed.

The refugees bought stuffs while waiting as they were uncertain when they will head for the next stop.

However, the number of refugees transported to the Macedonian-Greek border per day is around 3,500 to 4,000.