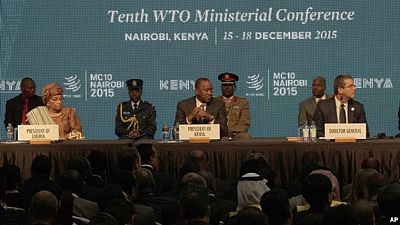 As a measure of marking the first major global tariff-cutting deal in 19 years, members of the World Trade Organization (WTO) has signed an agreement to remove import tariffs on 201 information technology products.

The deal, signed by 53 countries including China, will remove tariffs on IT products trade meaning consumers would pay less for items such as touch screens, computers and GPS navigation systems while manufacturers will see cuts in the cost of electronic parts, semi-conductors and machine tools.

"This is a 1.3 trillion US dollar package which gives you sixty five percent advantage of importing duty-free. I think you can't get better than that. So it's up to the young people and people who are in the IT sector to exploit this opportunity"

The deal, which liberalizes tariffs on 201 IT products, valued at over $1.3 trillion per year, is expected to increase global GDP by $190 billion a year by cutting costs on a wide range of goods.

It would be recalled that Textiles, like agriculture, was one of the hardest-fought issues in the WTO, and has completed fundamental change under a 10-year schedule agreed at the Uruguay Round. However, with the new measure in place, the system of import quotas that dominated the trade since the early 1960s have now been phased out.

The agreement is expected to enter into force next year. The products covered account for 10 percent of global trade

53 members of the WTO have reportedly signed an agreement to remove tariffs on more than 200 IT products: https://t.co/CwxZVLrcY0

Head of the Kenyan delegation, Karanja Kibicho said kenya is one of the most technologically advanced countries in Africa, known for its pioneering Mpesa mobile money transfer application and an innovation-driven digital economy. But along with a majority of the least developed countries at the WTO, it is pushing for a major trade deal that would particularly reduce trade costs for its agriculture sectors.

Joining the WTO involves a two-track process in which a candidate country must bring its laws in line with an accepted rulebook and also offer to cut barriers to trade, giving every existing member an effective veto on each new member. Liberia and the Islamic Republic of Afghanistan are the latest states to join the WTO.