CAF President optimistic about the future of African football

The president of the Confederation of African Football (CAF) is optimistic about the future.

Speaking on Wednesday, Dr. Patrice Motsepe reflected on the achievements of African teams in Qatar and Morocco in particular.

'These are indeed proud moments, a proud period for football on the African continent. Taking into account the performances of all of our five national teams that were representing Africa at the FIFA World Cup in Qatar and in particular the historic achievements of Morocco that has made all of us exceptionally proud. They've made all of us in Africa uniquely proud", said CAF President, Dr. Patrice Motsepe.

The president of the African football body believes it's fundamental to continue to encourage the development of local talent.

''there is in my mind approximately ten nations in Africa now that can compete at the highest level in the world and win. Ten nations and it may be 15. But I have to say, we have to encourage every single one of the 54 nations in Africa", said Dr. Motsepe.

World Cup 2026 will be split between the USA, Canada and Mexico. 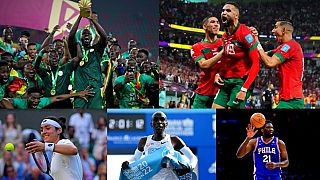