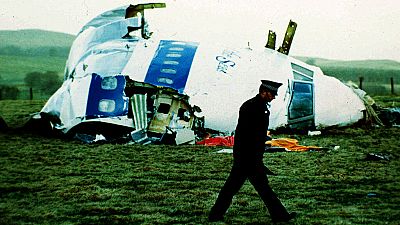 A Libyan man suspected of assembling and programming the bomb for the Lockerbie bombing in Scotland that killed 270 people in December 1988 is in U.S. custody, U.S. authorities said Sunday.

A Justice Department spokesman confirmed in an email to AFP the arrest and detention of Abu Agila Mohammad Massoud, revealed earlier by the Scottish prosecution.

"He must appear before a court in the District of Columbia", that is to say, the capital Washington, said the spokesman, without indicating a date.

No details were given on the circumstances surrounding Mr Massoud's arrest.

According to the New York Times, he was arrested by the federal police (FBI) and is being extradited to the United States.

"The families of the victims of the Lockerbie bombing have learned that suspect Abu Agila Mohammad Massoud is in the custody of U.S. authorities," the Scottish prosecution service said earlier in a statement.

"The Scottish prosecution service and the police, in coordination with the U.S. government and U.S. colleagues, will continue to pursue this investigation with the sole aim of bringing to justice those who acted alongside al-Megrahi," the only person convicted in this case, it added.

In their own statement on Sunday, the families of the victims welcomed the arrest, calling it an "important step" in their quest for justice and saying they "look forward to the trial.

The attack had targeted a transatlantic flight from London to New York. The plane, a Pan Am Boeing 747, exploded on December 21, 1988, over the Scottish village of Lockerbie, killing all 259 passengers and crew and 11 people on the ground.

Only one person was convicted for this attack: the Libyan Abdelbaset Ali Mohamed al-Megrahi, who died in 2012. He had always claimed his innocence.

Released on August 20, 2009, by the Scottish justice, because of terminal cancer, he had received a triumphal welcome on his return to Tripoli, causing controversy in Britain, accused of having acted to preserve an oil contract with Libya.

In December 2020, 32 years after the tragedy, the U.S. justice announced to prosecute Abu Agila Mohammad Massoud, a former member of the intelligence services of Muammar Gaddafi and at the time detained in Libya, accusing him of having made the bomb.

The Lockerbie bombing was the deadliest attack ever committed on the territory of the United Kingdom, but also the second deadliest against Americans (190 dead) after the attacks of September 11, 2001.

The regime of Libyan dictator Muammar Gaddafi officially acknowledged its responsibility for the Lockerbie bombing in 2003 and paid 2.7 billion dollars in compensation to the families of the victims.

The investigation was re-launched in 2016 when the U.S. justice system learned that Mr. Massoud had been arrested after the fall of the dictator and had allegedly made a confession to the intelligence services of the new Libyan regime in 2012.

Last year, the Scottish court rejected an appeal by al-Megrahi's family, ruling that there was "no miscarriage of justice."

The court also rejected the defence of the convicted man's family, which argued that documents related to the case, which the British authorities refuse to declassify, could have led to a different verdict.

These documents would have implicated Iran, in retaliation for an Iranian civilian plane shot down by a U.S. missile in July 1988 killing 290 people.

The lawyer for the al-Megrahi family, Aamer Anwar, for his part, denounced once again, in a statement, a "miscarriage of justice" aimed at his client and said he was "examining what these developments mean in terms of a potential new appeal.