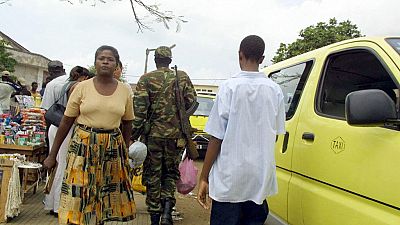 The government of Sao Tome and Principe on Thursday ordered an investigation into "cruel and inhuman acts" allegedly committed by military personnel against men accused by the Prime Minister of attempting a "coup d'état" on November 25, the state news agency reported.

The head of the government Patrice Trovoada had said on Friday 25 November that four assailants had been captured after six hours of gunfire at the army headquarters in the capital Sao Tome, as well as two "commanders" arrested later at their homes, including the former president of the outgoing National Assembly and opponent Delfim Nevès.

On the same day, numerous photos and videos, not authenticated by AFP, circulated widely on social networks.

They claimed to show acts of torture and harsh interrogations of three of the attackers and one of the alleged "sponsors", Arlécio Costa, an opponent, and former mercenary, by men in military fatigues. Then other images claimed to show the same four men dead.

Two days later, Chief of Staff Olinto Paquete announced that three of the four assailants had been killed in an "explosion", without further details, that Arlécio Costa had died "jumping from a vehicle", and that 12 soldiers who had "participated" in the attempted putsch had been arrested.

Mr. Paquete announced his resignation at a press briefing on Thursday, reported STP-Press. He mentioned, in particular, the diffusion of shocking images, and assured that he could not "accept such atrocities and acts of treason that harm the country".

And the government has asked the judicial authorities "to investigate cruel, degrading and inhumane acts perpetrated against individuals at the army headquarters and whose images have shocked and outraged society," the Santomean agency wrote, citing a government memo.

The government note said the alleged acts were perpetrated "on individuals involved in the attempted coup and the assault on the headquarters" of Friday, November 25.

Mr. Trovoada had claimed in front of the cameras that the army had foiled an "attempted coup" and that four captured assailants had "denounced" Mr. Nevès and Mr. Costa as the "commanders".

But Santomeans and local NGOs have since multiplied the posts on social networks raising "grey areas" in the facts and their chronology, and the acerbic or horrified comments on the photos and videos disseminated.

Mr. Nevès, released under judicial supervision on Tuesday, denounced the next day before the press a "sham" intended to "eliminate" physically "political embarrassments" of which he "is part. And accused its authors of having killed those who could confuse them, Mr. Costa and the three assailants.

In the afternoon, the Prime Minister dismissed accusations that the coup attempt was a maneuver by the government: "What would be the purpose of the government to organize a coup against itself when we took office 15 days ago?

Sao Tome and Principe, a small archipelago in the Gulf of Guinea, independent from Portugal since 1975, is considered a model of parliamentary democracy in Africa, where alternations in power have been smooth since the end of the one-party regime in 1991. And despite two attempted coups, in 2003 and 2009, in which Arlécio Costa had already been implicated, arrested, and convicted, then pardoned.