Rocking the runway with trash and recycled materials on. Young models took part in the 2022 edition of the annual trashion show in Lagos, Nigeria.

Since its inception in 2012, models grace the runway wearing outfits made from items we would normally throw in the garbage.

Greenfingers Wildlife Initiative, a non-profit conservation group funded by donations, works with young people as an advocate for a better environment.

"It’s about the advocacies they are raising now, the things they… whatever they are talking about now to prepare that future that will create a sustainable planet for them during their time, we are seeing the damage, we are seeing the problems, we are seeing chaos, they are already worried that they may not have a safe environment to live in, so, they are making the right choices now"

The environmental activists have been partnering with teenagers in their drive for a better, cleaner environment.

It organizes regular trash clean-ups across communities, at drainage ditches and beaches. The plastic litter is then used to create fabrics for the fashion show.

Despite several efforts by succeeding governments and commercial organizations in that regard, managing garbage disposal remains a problem in Lagos.

With an estimated population of 25 million, generates at least 12,000 metric tons of waste daily, authorities say.

In collaboration with young activists and models, the Greenfingers Wildlife Initiative says it's out to recycle as many plastics as possible, one community at a time.

Upcycling some of it could be a solution to managing garbage disposal, according to the designer for this year’s Trashion Show.

"All the products we’ve used in designing all these trashion dresses, they can be recycled for something else, so that’s the essence of the whole thing", Joy Udoka-Obi said.

Together with her team, she designed and created dress pieces out of the mounting plastic pollution they find on the streets, beaches, and waterways of Nigeria’s booming cultural megacity.

Model Nethaniel Edegwa believes her involvement in the show is about making a difference.

"My advice to people living in Lagos and Nigeria is in treatment of their waste, they shouldn’t treat waste anyhow, reduce, reuse, recycle is the thing they should go for like they should not find a way…they should find a way to reuse what they have like this is a very good way to reuse your trash and you should also discard them properly not on the floor lying around", Eyeoyibo Joyce, a 15-year-old model pleaded.

On November 20, one day following the show, the United Nations COP27 climate summit backed the creation of a fund to cover the damages suffered by nations worst affected by the climate crisis.

In Nigeria, more and more young people are joining the push for change as the effects of climate crisis worsen with each passing year. 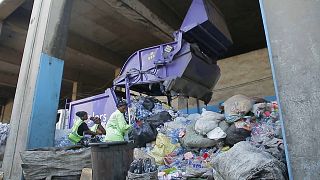 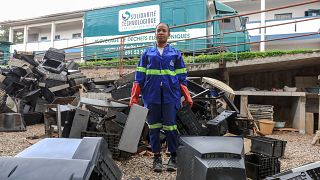