Malawi is facing an influx of refugees fleeing the recently intensified unrest in the eastern Democratic Republic of Congo, the World Food Programme (WFP).

The Dzaleka camp, the only refugee camp in the small, poor southern African country located about 40 km from the capital Lilongwe and initially designed to accommodate 10,000 people, now has nearly 56,000 refugees, the majority of whom are Congolese, according to the WFP.

"The situation is alarming," said Paul Turnbull, the UN food aid agency's representative in Malawi. "Conflicts in the Great Lakes region, particularly in the Democratic Republic of Congo, have resulted in a steady flow of refugees into Malawi for more than two decades, with a recent surge in new arrivals.

According to the UN High Commissioner for Refugees, 560 new arrivals were recorded in September alone. In March of last year, there were just over 49,000 refugees in the camp.

The vast majority are Congolese (62%), but there are also Burundians (19%) and Rwandans (7%), with the rest coming from Ethiopia and Somalia.

This overpopulation is causing tensions. This week, refugees seized a WFP car to show their displeasure after 600 families were removed from the lists of food distribution beneficiaries, out of the 11,000 in the camp.

"Food assistance should be provided on the basis of vulnerability," Turnbull said, noting that some refugees have opened small businesses or found alternative livelihoods.

Romain Bijangala, a Congolese community representative in the camp, said some were "sleeping on an empty stomach" and "without food aid, they will certainly die."

Eastern DRC has been plagued by violence from armed groups for nearly three decades. Fighting has recently intensified between the "March 23 Movement" (M23), a former Tutsi rebellion that has taken up arms, and the Congolese Armed Forces. 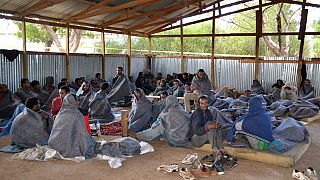