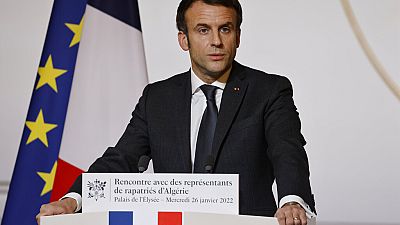 French President Emmanuel Macron will embark on a three-day “goodwill visit” on Thursday to Algeria.

The visit comes at a time when some of Paris’ European allies, scrambling to replace Russian fossil fuels ahead of what promises to be a cold winter, are looking to Algiers for their energy needs.

The memorial issue, the war in Ukraine and Algerian gas, visas, security in the Sahel... and getting out of the quarrels of the first quinquennium: the upcoming visit of Emmanuel Macron to Algeria is heavy with issues.

Emmanuel Macron, the first French president born after the Algerian War (1954-1962), has not stopped, since his election in 2017, trying to normalize relations between the two peoples. Still a candidate, he had struck the spirits by calling colonization a "crime against humanity", and has since multiplied the memorial gestures.

However, it appears Algeria has not embraced this work of memory and has deplored the fact that the French president does not express "repentance" for the 132 years of French colonization.

After months of tension, Emmanuel Macron reproached the Algerian government for exploiting the "memory rent" of the war of independence to maintain its legitimacy and questioned the existence of an Algerian nation before colonization.

Since the beginning of the war in Ukraine, Algeria - one of the world's top ten gas producers - has become a coveted interlocutor for Europeans anxious to reduce their dependence on Russian gas.

"The French president will certainly ask Algeria to make an effort to try to increase its gas production," anticipates Algerian economist Abderahmane Mebtoul. But "if the French wants more, they must invest" in the gas industry and renewable energy in Algeria, according to him.

Algeria has become in recent months the first supplier of gas to Italy, via the Transmed pipeline that passes through Tunisia.

France is struggling economically in Algeria where, with about 10% of the market share, it is now supplanted by China (16%), the country's largest supplier. Suez has lost the management of water in Algiers, the RATP that of the metro and Aéroports de Paris that of the capital's airport.

The Renault automobile group's plant is also hampered by state quotas on imported parts. "There are many possibilities but France needs to change its software. France has lost a lot in Africa," notes Abderahmane Mebtoul.

Paris has reduced the number of visas granted to Algeria - as well as to Morocco - by 50% to put pressure on governments considered too uncooperative in the readmission of their nationals expelled from France. "The reduction in the number of visas has important effects in Algeria. It creates pressure on the Algerian government," said Xavier Driencourt, former French ambassador to Algeria.

The two capitals want to "move forward" on this issue, however, notes the Élysée, noting that since March 2022, the Algerian authorities have issued "300 passes (for returns), against 17 over the same period in 2021 and 91 in 2020.

President Macron's visit is likely to raise tensions, if not criticism in Morocco, Algeria's great regional rival and whose relations with Paris have cooled. "There is always competition between Algeria and Morocco, and Algeria wants to score points with this visit," said Xavier Driencourt.

Conversely, Rabat expects France to show more "clearly" its support for the Moroccan autonomy plan to settle the Western Sahara conflict. Algeria, which supports the Sahrawi independence fighters of the Polisario Front, has for its part broken off diplomatic relations with Morocco in August 2021.

"President Macron knows that without the collaboration of Algiers, it is very difficult to achieve any breakthrough in the Sahel and Libya," said Hasni Abidi, director of the Center for Studies and Research on the Arab and Mediterranean World in Geneva.

Algeria claims an important role in Mali, from which the French army has just withdrawn, and maintains "excellent relations" with the military junta in power in Bamako, continues the expert, noting also the "important relations" of Algiers with Niamey and other African capitals.

NGOs denounce the regime's turn of the screw, which has stifled the popular Hirak protest movement that led to the fall of President Abdelaziz Bouteflika in 2019.

A dozen organizations of the Algerian diaspora have urged Emmanuel Macron "not to overshadow" the subject of rights and freedoms in Algeria.