Mali's transitional government reacted on Friday to the withdrawal of France's last soldiers in the country on August 15. The Barkhane force had been operating in the country for the last nine years in order to help the local army counter, terrorist groups. But Relations between Bamako and Paris have constantly deteriorated since the two military coups in August 2020 and May 2021.

"The Transitional Government has noted the effective departure of the French Barkhane force from Malian territory since August 15, 2022. As a reminder, France decided unilaterally on June 10, 2021, to withdraw the Barkhane force from Mali by adopting a timetable without consulting the Malian authorities, to whom it was bound by defence agreements.", declared news presenter Awa Mah Camara, on national TV. The journalist was reading a document published by the military government in which it also promised the population their security would not be altered by this departure and on the contrary would considerably improve. "The Transitional Government takes note of this final withdrawal of the Barkhane force and reassures the Malian population that, thanks to the rise in power of the brave Malian forces, more successes will be recorded against the terrorist groups", read Awa Mah Camara.

Ties with France have also been going downhill because of the growing presence of Russian soldiers, instructors and weapons in the country since last December. In a letter to the Chinese presidency of the UN Security Council sent on August 15, Mali's Foreign minister accused France of arming jihadist groups and "frequently violating" the nation's airspace. 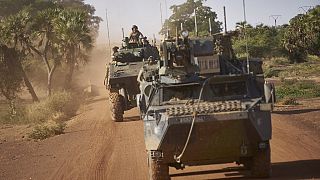