Kenya's Deputy President William Samoei Ruto likes to call himself a man on a mission. If accomplished on August 9, his mission could lead him to the Nairobi State House.

On Tuesday, the Eastern African nation will hold its general elections. The competition for the presidential seat is set to be a two-horse race between Ruto and veteran politician Raila Odinga who is now backed by president Uhuru Kenyatta.

Throughout the campaign; the 55-year-old was clad in bright yellow attires of his United Democratic Alliance, whose symbol is the humble wheelbarrow. Ruto relentlessly reached out to those suffering most from the Covid-induced cost of living crisis.

When he unveiled his manifesto, he dedicated it to the hustlers- those "at the bottom of the pyramid". He hass pledged to bring them "durable growth, while maintaining macroeconomic stability".

The 55-year-old is making his first stab at the presidency and has teamed up with Rigathi Gachagua another former ally of President Kenyatta.

Both businessmen qnd politicians are among Kenya's wealthiest men.

If Ruto's fortune is now said to run into many millions of dollars, with interests spanning hotels, real estate and insurance he sold chicken near his childhood home to pay school fees for his siblings.

He first got a foot on the political ladder in 1992 and worked with figures like former president Daniel arap Moi, Uhuru Kenyatta and even Raila Odinga.

He now hopes to write a new page of Kenya's history. 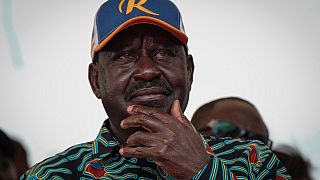