Senegalese voted this Sunday to elect the country's deputies. These elections stand as a decisive test for opposition parties trying to tackle the ruling party's influence ahead of the presidential election in 2024. Many fear President Macky Sall may seek a third term.

"It's is the destiny of our people that is at stake today with these legislative elections. It is extraordinary. It is very important. People must vote.", says El Hadji Ngagne Ndiaye outside a polling station in Dakar.

About 7 million voters were called to elect the 165 deputies in their National Assembly. "We want to have a dynamic assembly. An assembly that represents and assists the people. The Senegalese people really need this.", says Madame Gomis quieting to vote in the capital.

The political atmosphere is tense in the Western African country even more so since the list of the opponent Ousmane Sonko was rejected for this vote. During protests in June, three people died. 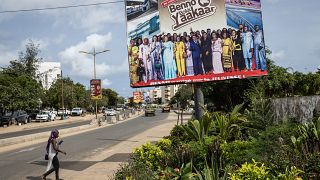