The leader of Tunisia's Islamist-inspired opposition party Ennahdha was questioned and then allowed to go free by an anti-terror unit, just days before a controversial constitutional referendum.

After a "more than nine-hour" session and "19 defence speeches" requested by lawyers, Rached Ghannouchi left the anti-terror centre and headed home, his lawyer and former Ennahdha official Samir Dilou said on Facebook.

Dilou told AFP the anti-terror unit had allowed Ghannouchi freedom of movement, while another lawyer said the politician was not the subject of "judicial control measures".

Ghannouchi's supporters had feared he would be arrested after being questioned.

More than 20 security vans were stationed in front of the headquarters of the anti-terror centre, where scores of Ennahdha activists were gathered in support of their leader, AFP correspondents said.

Supporters chanted Ghannouchi's name as he entered the building, making the victory sign and waving placards.

"Stop political trials", one read, written in both English and Arabic.

Ghannouchi, 81, has been under investigation since June amid allegations of corruption and money laundering linked to transfers from abroad to the charity Namaa Tunisia, affiliated with Ennahdha.

Jebali was later released, but is due to face questioning on the allegations on Wednesday.

Earlier this month, a court ordered the freezing of the bank accounts of Ghannouchi and a dozen members of his family and his party -- including Jebali -- as part of this investigation.

In June, Ghannouchi was also handed a ban from travelling abroad as part of a separate investigation into high-profile political assassinations that rocked the country in 2013.

Ennahdha and Ghannouchi deny all charges against them.

Saied has put forward a draft constitution set for referendum on July 25, the anniversary of his power grab.

Opponents accuse him of waging political vendettas and dragging the country back to dictatorship, over a decade since its pro-democracy revolt sparked the Arab Spring uprisings. 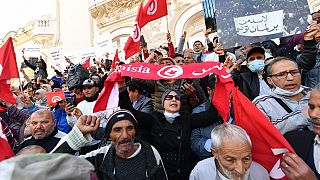