Unable to switch on lights or heaters, cook dinner or charge their phones, South Africans are spending their mid-winter evenings plunged in darkness and low-tech living.

Electricity cuts in South Africa are a notorious, years-old problem.

But the frequency of power losses -- two to three times per day and lasting up to four hours at a time -- is the worst since a bleak episode in December 2019, and many people are livid.

"It's like we're back to apartheid life, whereby we're back to candles, paraffin stoves," said Rebecca Bheki-Mogotho, a Johannesburg city employee.

Her comparison was with life under South Africa's former segregationist regime, which deprived the black majority of basic infrastructure and services.

The leading economy on the continent, South Africa relies on coal to generate more than 80 per cent of its electricity.

The country has plenty of coal, but most of its plants are ageing, need repair or are scheduled to be decommissioned in the coming decades.

"We didn't do what we should have done in the past five to 10 years," energy analyst Clyde Mallinson said.

"We've got ourselves caught in a situation where we are desperately trying to plug what's broken rather than get ahead of it."

The wage dispute that compounded the crisis concluded Tuesday with Eskom employees accepting a seven per cent increase, which the electricity provider said in a statement "will be a struggle for Eskom to afford."

But even with workers back on the job, Eskom warned it would "still take some time" for the system to recover due to the backlog of maintenance.

The public entity is already laden with debt and struggling to recover from years of alleged mismanagement and corruption, which made it a key entity investigated during a four-year public inquiry into state graft.

To bridge the severe gap in supply, Eskom is relying on backup gas turbines that blast through 14 litres of diesel (3.7 gallons) per second. Seven of these turbines were in operation Friday.

The cost of using diesel as a substitute fuel has been stratospheric.

It has also spent more than double its annual budget for diesel only halfway into the year.

The big splurge is still not enough to avoid outages that can cause havoc, from delays at intersections with downed traffic lights to faults at substations prolonging blackouts.

In April, the company warned the country could see as many as 101 days of load shedding this year due to breakdowns.

At least 10,000 MW of renewable wind and solar energy should have been brought online since 2015 to keep pace with demand, Mallinson said.

An intensive building strategy to make that up in the next two years would relieve the issue.

"We have to build rapidly, like our lives depend on it," Mallinson said.

"As the problems... with the core energy supply from Eskom rising and the shortfalls are increasing, the pressure and the inclination to actually move that way is actually getting stronger," Langenhoven said.

Eskom's senior officials have similarly made repeated calls for the swift development of new energy sources.

But in February, Energy Minister Gwede Mantashe declared coal would remain "a mainstay" for South Africa's electricity mix for the "foreseeable future".

This comes despite South Africa being promised at least $8.5 billion from rich nations at the UN climate summit last November to aid its low-carbon transition.

The country's energy burden is only expected to grow in the coming years.

Power demands could triple by 2040 as transportation and other industries move to electrification, Mallinson said.

Without rapid investment, load shedding will remain a fixture. 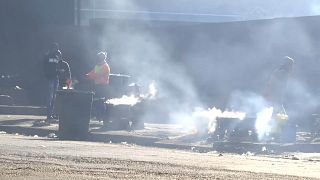