Relaxing in the Red Sea.

These tourists are having some much-needed vacation time on Egypt's Sinai peninsula.

They are from Israel, a nation which once went to war with Egypt over this slice of land.

But that turbulent history is far from their minds, the agenda today is about meditation, yoga and inner peace.

The peninsula is also a draw for Egyptians from the country's mainland, seeking a break from the cities and a slower pace of life.

In some locations, it has become a rare place inside Egypt where locals and Israelis can mingle openly.

Egypt's government is struggling to revive the vital tourism sector battered by years of instability following the 2011 uprising that toppled longtime autocrat Hosni Mubarak, then the coronavirus pandemic, and now the hit to tourism posed by the war in Ukraine.

Russian and Ukrainian visitors used to make up a large proportion of the country's tourism traffic.

There are indications that Israelis, drawn by ease of access and affordability, could be playing a greater role in the tourism industry.

The arrival of Israeli tourists is welcomed by many Sinai tourism workers, who say they are helping make up for the significant loss of Ukrainian and Russian tourists.

Israelis can travel to Sinai without a visa, which they would need to go to Egypt proper.

In 2019, 1.4 million Israelis crossed into Sinai by car, according to the Israel Airports Authority, which oversees the Taba crossing.

The pandemic brought those numbers crashing down, with just 335,436 making the journey in 2021.

But this year, tourism is rebounding and it looks like visitors will be back to pre-COVID levels - 334,000 Israelis have entered through the Taba crossing as of early June. The peak season will continue through the summer.

The Sinai Peninsula, particular its southern part with its striking red-rock mountains and clear waters, has long been popular for its pristine beaches and coral reefs.

The peninsula's Bedouin communities host tourists in simple beachside camps with huts made out of palm branches.

Many Egyptians, though, continue to consider Israel an enemy for its treatment of Palestinians.

And many resent Israel for its occupation of the Sinai peninsula, between the 1967 war and the peace treaty.

But in 2021, Israel removed a longstanding advisory against travel to Egypt's Sinai Peninsula, a move seen as a gesture to its strategic partner.

For years, flights had operated between Tel Aviv and Cairo unannounced by the airlines.

"Life here unites people in a strange way, there is nothing here related to separation, I mean there are no politics here that would separate one another or a religion that would disunite people. People here live in a strange harmony and I believe that is what God wants from us," says Sameh Mohamed, Egyptian tourist.

Egypt's government is struggling to revive the vital tourism sector battered by years of instability following the 2011 uprising that toppled longtime autocrat Hosni Mubarak, then the coronavirus pandemic, and now the hit to tourism posed by the war in Ukraine.

Egypt had been also battling militants in the northern part of the Sinai Peninsula for years, but it has managed to keep that separate from the tourist destinations farther south**.**

Egypt's economy depends heavily on tourism, which accounts for some 12 percent of the gross domestic product. 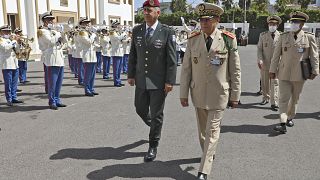