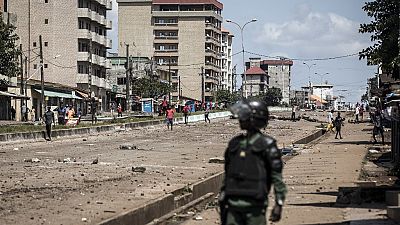 A member of Guinea's security forces has been jailed for murder in the investigation into the death of a youth shot dead on the sidelines of a fuel price protest in Conakry on June 1.

Four other members of the security forces were charged with "criminal abstention" and were placed under judicial supervision, Attorney General Alphonse Charles Wright in a statement said Monday evening.

The indictments of the five suspects are exceptional in a country whose gendarmerie and police forces have long been criticised by rights activists for their excessive use of force and the impunity they enjoy from the authorities.

"Moriba Camara has been charged and placed under arrest for the alleged murder of Thierno Mamadou Diallo," the public prosecutor announced.

The death of Thierno Mamadou Diallo, 19, shot dead during clashes between security forces and demonstrators, is one of the first in a context of protest since the seizure of power by Colonel Mamady Doumbouya.

The Attorney General had promised to shed light on the death. He confirmed last week that relatives said the young man was in a shop when he was hit by a bullet as shots were fired outside during a spontaneous demonstration against rising fuel prices.

Dozens of Guineans were killed between 2019 and 2021 during demonstrations against a third term for President Conde, the vast majority by gunfire. Almost no police or gendarmes have been held to account.