A Civil security expert has said it is likely that a "short circuit" caused the fire that gutted a hospital in Western Senegal killing 11 newborn babies on Wednesday.

Amadou Fall Canar Diop made the remarks after assessing the scene of the disaster.

"It seems that it's a short circuit. You know, in the neonatology department, there are incubators, everything is electric, everything is plugged in, and there have been extension cords that are too full. So all it takes is for a short circuit to find an element, such as plastic, for a fire to start, and then it develops quite quickly and letting off very severe smoke," Diop said.

The tragedy has triggered a public outcry over the state of the country's health facilities.

At a press conference, the regional Public prosecutor vowed swift action. An investigation to establish the cause of the fire is already underway.

"I assure you that justice will be unrelenting, unrelenting I must say, unrelenting I specify, with any person whose responsibility is compromised. Here is roughly what we can tell you at the moment while waiting for the closure of the investigation which is taking its course," said Abdoulaye Ba, the public prosecutor of Thies region.

The fire is the latest incident to rock Senegal's health system in as many weeks. In April, a woman in labor died at a hospital in the north of the country after pleading for care from midwives for hours. 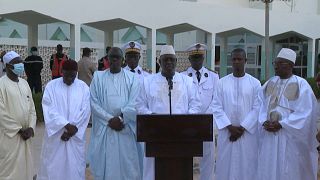