Tunisia's powerful trade union centre UGTT has refused to take part in a dialogue proposed by President Kais Saied with the aim of founding a "new republic" after taking over full powers in July 2021.

Mr Saied on Friday appointed a lawyer believed to be his ally - Sadok Belaïd - to head a commission in charge of drafting a constitution for a "new Republic" through a "national dialogue" from which political parties are excluded.

According to a presidential decree, this commission will present "a draft constitution" to the president.

This will be after a national dialogue, which will involve all the unions in the country.

However, at the end of a meeting of the UGTT's governing body on Monday under the chairmanship of its secretary-general Noureddine Taboubi, the trade union centre announced its intentions to boycott the proposed dialogue.

The UGTT "will not participate in the national dialogue in the format proposed by President Kais Saied, which has not been the subject of prior consultations and does not meet the expectations of national forces to establish a patriotic process to overcome the crisis," said the trade union centre in a statement.

The UGTT believes that this dialogue aims to "endorse conclusions decided unilaterally in advance and force them through as faits accomplis".

For the trade union centre, "not only is this dialogue not likely to get the country out of the crisis, but it risks aggravating and prolonging it".

"This dialogue is not up to the crisis that Tunisia is experiencing and does not show a better future," Taboubi told the press at the end of the meeting.

"We call for a real national dialogue because the one currently proposed excludes important political components in the country," he added.

Mr Saied had announced in early May the establishment of a "national dialogue" awaited for months while attacking the political parties he accuses of having plundered the country in recent years.

In a roadmap meant to get the country out of the political crisis, Mr Saied has scheduled a referendum on constitutional amendments for 25 July, before a legislative session on December 17

After months of political stalemate, Mr Saied, elected in late 2019, assumed full power on 25 July 2021 by sacking the prime minister and suspending the parliament dominated by the Islamist-inspired party Ennahdha, his bête noire, before dissolving it in March. 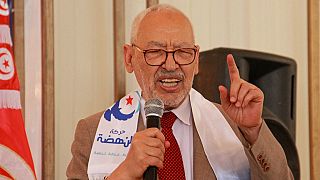