In Sudan, three-wheeler vehicles -- tuk-tuk rickshaws for passengers, and motorbike tricycles with a trailer attached for carrying goods -- have long been a popular and affordable transport. But the country is gripped by a dire economic crisis made worse by political unrest and a soaring price of oil. An entrepreneur has bet on the potential of electric vehicles.

A revolution is underway at the electric powered tuk-tuk rickshaw al-Shehab factory in Khartoum. Three-wheeler vehicles are popular in Sudan but since the October coup, drivers have to put up with a soaring cost of oil. To avoid this problem, an entrepreneur has bet on the potential of electric vehicles.

Amid the economic crisis, Sudan's electricity supplies have suffered too, with frequent power cuts. That’s why Mohamed Samir came up with an alternative to get free from dependency on the power grid:  "The electricity problems will affect our products, as the lack of availability will make drivers unable to charge (their vehicles). So, we installed a solar panel system for the tuk-tuk and the rickshaw. It allows for increasing the distance covered by 50 percent."

A tuk-tuk tricycle can cover up to a 100 km thanks to this equipment, while, a rickshaw's range is between 100 and 120 kilometres. There is a critical environmental impact too. Smoky petrol-powered vehicles, aside from fuelling climate change, cause "significant noise and air pollution", the United Nations Environment Programme warned in a report from 2020.

The business-owner also paid close attention to the UN's sustainable development goals when manufacturing his unique tricycles. "We managed to achieve three of the sustainable development goals. We achieved the goal of no poverty, which means fighting poverty, as well as the goal of good health and well-being, we also achieved action for the climate by reducing emissions."

Despite challenges to get the garishly-coloured motorised rickshaws manufactured at first, the venture has proven successful. Amjad Hamdan Hameidan, who bought several electric-powered rickshaws, powers his three-wheeler on the go. "It doesn't need lots of spare parts or fuel. It requires little operational cost and has little malfunctions." 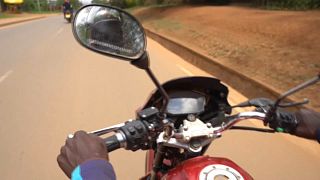