The announcement was made during a speech broadcast on television on Saturday. Colonel Doumbouya added that the measure would be subject to the National Transitional Council acting as parliament.

"From all consultations at all levels since the beginning of the transition, with all groups of society, from all Guineans wherever they are, the median proposal that emerged is a transition of 39 months. The CNRD [National Rally and Development Committee, ed.] and the government will submit to the CNT [National Transition Council, ed.], acting as a parliament, this proposal that followed long and patient consultations", said Colonel Mamady Doumbouya, head of Guinea's military junta.

The announcement followed the creation of what the military leader described as an "inclusive consultation framework" in April.

The resulting conference culminated in a boycott by several prominent political groups.

Regional bloc ECOWAS had set last Monday as a deadline for putting forward an "acceptable" transition timetable or risk economic and financial sanctions. 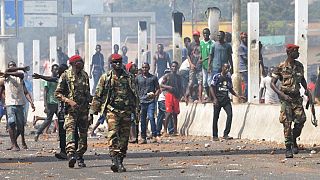