In southern Benin, there are hundreds of women who process cassava, grouped together in cooperatives.

Gari (cassava flour) and its derivatives are of considerable social and economical importance in Benin.

Cassava flour is one of the main staple foods of the country and contribute to food self-sufficiency.

The cooking of cassava flour (garification) is traditionally done by burning wood which women have to collect daily and represents an additional challenge.

"We have to look for wood but we have to go very far to find it. There is no wood near here. We walk up to 2 to 3 km to bring wood for the cooker" said Reine Ogoubi, a 7-months pregnant cassava processor.

The manioc tubers are then peeled, an activity that is always done in groups, to the rhythm of songs and dances to make the work less painful.

After seeing the difficulties faced by the women farmers, Grace Chidikofan designed a bio-digester.

Cassava peelings and other organic waste from the production of gari will now be dumped into it.

The biogas produced will replace firewood in the making of gari, while the organic compost from the biogas production will be used as fertiliser in the cassava fields.

The initiative will reduce deforestation and increase the income of 350 women cassava processors.

"It is an affordable technology that is easy to use and these women have demonstrated this. After a short training they quickly got the hang of it, and now they use it very easily. And it also allows them to be self-sufficient in energy;  they produce their own energy on the spot and they use it" explained Grace Chidikofan, project coordinator of the NGO Afrique Espérance.

By adopting biogas as an alternative energy source, the 350 or so women who process cassava in the commune of Zé will reduce the costs of producing gari, while protecting their health and the environment.

The production of one kilogram of gari requires an average of 1.30 to 2.40 kg of wood depending on the type of household.

Women are therefore exposed for almost 10 hours a day to the smoke generated by burning firewood.

These fumes may eventually cause respiratory, cardiovascular and eye diseases.

"We used to cut down trees but that caused the lack of rain and there are no more sources of wood. So we have now given up deforestation and the bio-digester provides us with fertiliser that we use on our plants without having to resort to imported fertilisers", said Paula Gnacadja, President of the Ayiminazé association. 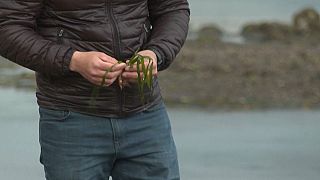