Two more combat helicopters and surveillance radars arrived in Mali on a Russian cargo flight. The consignment brings to eight the known number of helicopters that Moscow has provided under closer ties forged by colonels who seized power in 2020.

A source in the defence ministry said four similar deliveries were expected over the next three months.

"This is the manifestation of a very, very fruitful partnership since we started to work with the Russian state again," said Oumar Diarra, Chief of the General Staff of the Malian Armed Forces.

Meanwhile, the French army officially handed over the keys of the Gossi base in northern Mali to the Malian armed forces (FAMA) on Tuesday, a major step in the departure of the Barkhane anti-jihadist force from the country.

The Gossi post that has around 400 containers "was handed back in its usual state with all the defensive devices, all the equipment as well as the barracks infrastructure.

The Barkhane force in the Sahel, which is France's largest current external operation, had mobilized up to 5,500 men on the ground in 2020. The base began its transformation last summer on the decision of Emmanuel Macron, who initially planned to reduce this number to 2,500 or 3,000 by 2023. 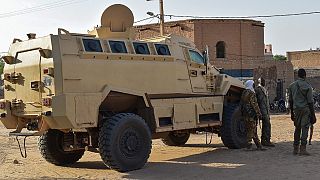