Cape Verde is feeling the reel of the high cost of living execrated by the current war in Ukraine.

Many people are now hoping that the government will step in to stem the ever-increasing prices of food, petrol and other services in the country.

Some businessmen are now calling on the state to control the prices of commodities entering the country to curb traders taking advantage of the situation.

"The rise in prices is worrying at all levels, especially for food products. We are aware of the international situation, but not everything is due to the international situation. Often, producers and traders take advantage of crises to raise prices. We don't have a law that limits prices, there is no supervision and control," said Lenine Mendes, a Cape Verdean businessman.

Prices in Cabo Verde increased by 0.7 percent in February and accumulate a rise of 7.1 percent compared to the same month of 2021, indicating the latest data from the Cabo Verdean INE.

From corn to olive oil, rice, as well as fuel, bread, sugar, flour, and meat, are some of the products whose price rises Cape Verdeans consider exaggerated and call for intervention from the government and regulatory authorities.

Maria da Luz, 50, is from the municipality of Santa Catarina, north of Santiago Island. She left a shop in Achada de Santo António with just two bottles of oil, each at 265 escudos (2.4 euros), but she wanted more.

"I didn't even buy corn for the chicken that lay eggs. I also do buy rice and we eat it together," described the housewife. She further called upon the government to intervene regarding an increase in food prices in Cape Verde.

"The Government is fighting to help us, but I ask for more strength and courage, for our dignity," Maria da Luz pleaded, suggesting a "limit" on prices for the "poor" to be able to buy, as well as for everyone to pray for the end of the war in Ukraine.

In front of the same shop, Denilsse Tavares, 26, a resident in Eugénio Lima, set up her stand selling fruit. She demanded, "either prices go down, or salaries go up".

Fuel prices rose by 5 percent in April, the maximum limit stipulated by the government, but have accumulated an average rise of 42.6 percent in the last year, as well as a rise of 7 percent since last January.

Cape Verde's prime minister, Ulisses Correia e Silva, has previously ruled out the possibility of an increase in the national minimum wage due to the economic crisis.

"In a crisis situation increasing the minimum wage would be transferring increased problems to the private sector, which may even affect existing jobs," Correia e Silva said during a monthly debate late last year in the National Assembly, ahead of the escalating food and fuel prices caused by the war in Ukraine.

The prime minister had announced in January 2020, before the covid-19 pandemic, that the minimum wage for the private sector in Cabo Verde would increase to 15,000 escudos (135 euros) in 2021, an increase of over 35 percent in one parliamentary term, taking into account the previous increase from 11,000 escudos (99 euros) in 2016. 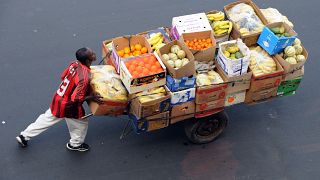