Along the road, green savannahs, dense forests crisscrossed by rivers, trees bursting with fruit or spotted with multicolored flowers. The fertile region of Lobaye, at the gates of the Central African capital Bangui, looks like a garden of Eden.

The civil wars and exactions of numerous armed groups over the past 20 years have relatively spared this forest area. It is here that a handful of private investors have decided to capitalize on the immense but still largely untapped agricultural potential of this country, the second least developed in the world according to the UN.

It is rare to see a truck passing on the road from Mbaiki, the capital of Lobaye, to Bangui, the only paved road in the region, and even rarer to see a plantation. The asphalt serves as a cassava dryer for the villagers.

Despite abundant water resources and millions of hectares of arable land, the Central African Republic is hungry. Nearly half of the population is in a state of food emergency, according to the UN Food and Agriculture Organization (FAO).

This is a situation inherited from decades of armed conflict and poor governance, in a country where mineral extraction is the focus of political ambitions and offers more immediate income to unskilled youth. Even food agriculture is barely developed: cassava, the staple of meals, is two-thirds imported.

The millions poured in by international organizations in food aid are perceived by many Central Africans as emergency responses at the expense of development.

"You can't come and distribute free food and ask someone to go to work. It's instilling in him a welfare mentality," says Raed Harriri, general manager of the Palme d'or company, the only large-scale representative of the agri-food sector. A speech regularly heard among small farmers.

Lebanese by birth, born and educated in the Central African Republic, Raed Harriri is a well-known figure there. He defends a pragmatic development model guided by private investment that does not deny profit but offers outlets to local farmers by developing product processing.

"We advocate a proximity policy. We have to go to the small producers, train them, bring them together in cooperatives and put means at their disposal, then we buy their production. And if they have trouble managing their budget between two harvest cycles, we guarantee them loans from microfinance organizations," he explains.

It doesn't matter that the business climate is notoriously difficult and that the armed actors are not very friendly. "You just have to know the networks and habits," he says in his office where portraits of Thomas Sankara, a pan-African hero, stand next to those of the current Central African President Faustin Archange Touadéra, whom he meets regularly.

Palme d'or's parent company, Al Sahely, was accused by NGOs of paying militias to protect its operations at the start of the civil war in 2013. But today it remains one of the only providers of jobs in the agribusiness.

With its humming machines, its fumaroles rising in shafts of light between silos swaddled with cables and sheaths, the Palme d'or factory in Bangui offers an unusual picture in a country with a virtually non-existent industrial fabric.

Inherited from the French colonial period, the agricultural sector, based on the export of unprocessed products, has not withstood the fluctuations in world prices since independence in 1960.

"Producing to export raw products is not the right method," pleads Jean-Luc Tété, a French-Central African who has taken the gamble of developing so-called "regenerative" agriculture in Lobaye. This technique allows the soil to rest after being tired from the incessant bush fires that hunters set to hunt small game.

"We combine crops, we avoid deep plowing, and we industrialize traditional agricultural knowledge, which means that we use practically no fertilizer. This allows us to have extremely low production costs," explains this entrepreneur who aims to create a model that can be exported to Africa.

More and more individuals from the diaspora are trying to return to the land.

"But you have to be accepted," says Tété, whose daily life involves long discussions with traditional authorities. "It is the village chiefs who determine where we can settle, and 20% of the profits are invested in education, health and infrastructure," he says.

"It's a partnership," said Jean Claude Silakamako, a village chief, after the meeting. "We offer our land, our intelligence too, now it's up to them to come with us. 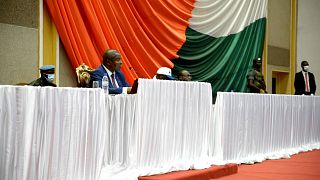 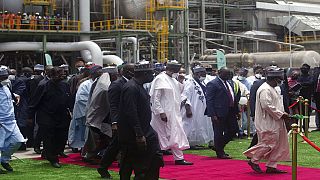