The island of Madagascar was hard hit by Cyclone Emnati, which also affected the semi-arid lands of the island's Grand Sud.

For the past four years, this region of 1.3 million people has suffered from food insecurity , according to the World Food Programme.

While this area had experienced very little rainfall over the past four years, the heavy rains that have fallen in recent days have given hope.

The Ministry of Agriculture, with support from the World Bank and the UN Food and Agriculture Organisation, has distributed 400 tonnes of seeds in recent months. Some crops have been covered by water from the Mandrare River, which has overflowed into the Anosy region. But the wetlands will allow villagers to replant new seeds.

During the cyclone season from November to April, the islands of the Indian Ocean are often hit by storms. 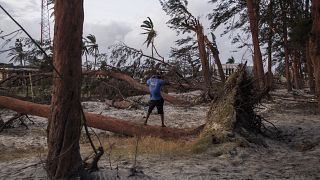