France is looking for other alternatives for its Barkhane forces that are leaving Mali following the fallout with the current regime.

France has announced it will position its soldiers in the other Sahel countries including Chad to help in the fight against jihadists in the region.

"We are preparing, in coordination with the Malian army, the way in which we are going to withdraw from Kossi, Menaka and Gao, which are the three holdings where we are located, and in the same way as we did in Tessalite or Kidal, we will do so in good order with the Malian army, the logistical and tactical maneuver, I can simply tell you that it is coordinated with the FAMA (Malian Armed Forces)," said Laurent Michon, Commander of Operation Barkhane.

The announcement of the withdrawal of the French force Barkhane and European members of the special forces group Takuba had been anticipated for several weeks in the face of hostility from the ruling junta in Mali and part of the population.

Laurent Michon further added, "We are reorganizing according to the intentions of the different countries, it is not really a redeployment, that is to say, we do not intend to put back the device currently in Mali somewhere else, that is not at all the spirit, whether it is in Niger, in Chad or in other countries in view of the terrorist threat that is descending towards the Gulf of Guinea, which is an observation shared by everyone, that it is the support and cooperation wished for by such or such country."

On Thursday, French President Emmanuel Macron made official the withdrawal of French troops and their European partners from Mali, where France has been fighting jihadists for nine years but wants to remain engaged in the fight in the Sahel in neighboring countries. 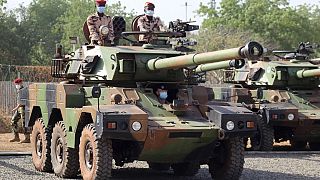