The party of the overthrown president of Burkina Faso, Roch Marc Christian Kaboré, said on Wednesday that it was "concerned" and asked the junta that took power to "release him without delay or conditions", one month after his arrest on 24 January in Ouagadougou.

"The People's Movement for Progress (MPP) invites the new authorities of Burkina Faso to release President Roch Marc Christian Kaboré without delay or conditions," wrote the party's president, Allasane Bala Sakandé, in a public statement on the national situation.

A statement released Wednesday indicated that his party is "worried" and questioned the reasons for keeping Mr. Kaboré under house arrest, who "has been moved several times with increasingly harsh conditions of detention".

The former ruling party also called on the head of the junta, Lieutenant-Colonel Paul-Henri Sandaogo Damiba, to "keep the commitments he has made to ensure that the fundamental rights of every citizen are respected".

On the day of the coup and his arrest on 24 January, Kaboré was placed under house arrest in a ministerial villa in the Ouaga 2000 district, where he had received leaders of his party and members of an international delegation that had come to Ouagadougou shortly after the putsch.

The release of the overthrown president has also been demanded by the UN, the African Union and the Economic Community of West African States (ECOWAS). 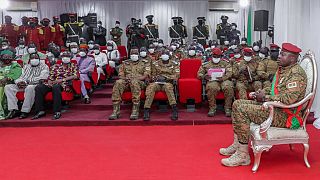