Israel Adesanya defeated Robert Whittaker by unanimous decision to retain his title and maintain control of the middleweight division at UFC 271 on Saturday night.

Adesanya (23-1) won his 11th straight middleweight fight in the UFC and remained undefeated. The judges scored it 48-47, 48-47, 49-46 in favor of Adesanya, who has won all four of his title defenses — three by unanimous decision and one by knockout.

“Seven out of 10,” Adesanya said of his performance. “Not bad. Good night in the office. Good chess match.”

The fight, which was a rematch of Adesanya’s title win over Whittaker (23-6) by second-round knockout at UFC 243 in 2019, was even throughout, with Whittaker taking the champion down several times. But, Adesanya also landed punches to Whittaker’s face and kicks to his ribs.

Following the bout, Adesanya said he told Whittaker that he respected him.

Following a fairly even third round, Whittaker took down Adesanya 1 1/2 minutes into the fourth round and got on the champion’s back to try to lock in a choke, but Adesanya again broke free of the hold.

In the final round, Whittaker tried twice to take Adesanya down, but the champion got up both times. The two locked up several times against the cage, with Adesanya able to break from of Whittaker’s grasp each time and landing punches to Whittaker’s face.

“Don’t get me wrong, I don’t want this popping up in a highlight reel screaming ‘Robert thinks he won, blah, blah, blah,’” Whittaker said. “I’m not taking anything away from him. He won. Literally, he won. He’s got the belt, that’s how it works. The judges gave it to him. That’s the game. That’s the business.”

The next contender for the UFC middleweight title might be Jared Cannonier (15-5), who knocked out Derek Brunson (23-8) in the second round of their fight earlier in the night.

After being taken down three times in the first round, Cannonier, the third-ranked middleweight, fought back in the second round, elbowing the fourth-ranked Brunson and dazing him before taking him down to the mat and knocking Brunson out with punches to the head, forcing the referee to end it.

Cannonier said in the post-fight interview in the Octagon he wanted the next shot at the middleweight champion, demanding UFC president Dana White, who was cage side, give him the opportunity.

“I wasn’t really looking past Robert,” Adesanya said. “I took him seriously and right all the way to the last bell I knew he was dangerous. … I had fun in there. I just want to watch it and back and study that fight. I look forward to fresh meat.”

In the co-main event, Tai Tuivasa (14-3) knocked out Houston native and third-ranked heavyweight Derrick Lewis (26-7) in the second round. Tuivasa, who has won five straight fights by knockout, recovered from a first round in which he was taken to the mat twice.

“I got a few bumps on the head, that’s for sure,” Tuivasa said. “It was nothing. I didn’t feel I was in too much danger. He’s the knockout king. He’s got big hands. … I definitely felt him, but I was still in the game.”

Tuivasa came out in the second round landing punches on Lewis and backing him up to the cage before landing a right elbow to the left side of his face, knocking out Lewis, who fell face-first onto the mat.

Lewis has lost two of his last three fights, with both losses coming in Houston. 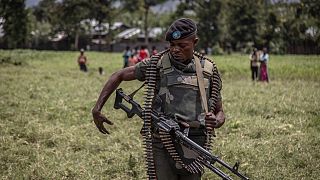