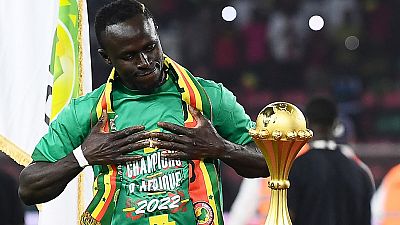 Sadio Mane says winning the African cup of Nations is the biggest achievement in his football career.

Mane scored for Senegal when he got the chance for a second penalty shoot during the closing match of the African Cup of Nations on Sunday where he sealed a 4-2 triumph.

"I won the Champions League and some [other] trophies but this is the special one for me. This is more important for me.

"I am happy for myself, my people and all of my family."

The 29-year-old Liverpool forward describes Senegal victory as 'the best day and best trophy' of his life.

Mane had been given a chance to give Senegal an early lead in Cameroon after Saliou Ciss was brought down in the area by Mohamed Abdelmonem in the fourth minute.

However, he saw his attempt beaten away by Egypt keeper Gabaski.

Mane was also named player of the tournament.

Sadio Mane says motivation from his teammates made him eager to score when he got the chance for a second penalty during the closing match of the African Cup of Nations where he sealed a 4-2 triumph.

"When I missed the first penalty, it was a big blow for me," he said.

"But my teammates came to me and said 'Sadio, we lose together and we win together. We know you. You have done too much for us - keep ongoing.

"That made me stronger and I think it made the difference when I got the second one.

"All the boys came to me and said 'Sadio, we trust you and that gave me more motivation. The trophy belongs to the whole Senegal team - everyone deserves it."

AFCON 2021: Historic win for Senegal in final against Egypt https://t.co/UzRf7drTMB

The West Africans had previously lost two Nations Cup finals, including a 1-0 defeat by Algeria three years ago.

Former Nigeria striker Daniel Amokachi, a Nations Cup winner in 1994 praised Mane saying, he "showed a lot of character" to take a penalty again in the shootout against the Pharaohs.

"I wasn't feeling it when he stepped forward, but you can see how he drilled that ball into the corner," Amokachi said.

"That's what a star player is all about. I did say that we've seen him miss chances when playing for Liverpool but the character that he puts into the game, the quality always comes through in the end."

Thousands of jubilant Senegal fans took to the streets of Dakar to celebrate late into the night on Sunday, waving national flags, dancing and firing fireworks into the air, and Monday was declared a national holiday to mark the side's triumph in Cameroon.