A court in South Africa has heard a bid by indigenious people seeking to halt the construction of Amazon's African Head Office on a sacred site outside Cape Town.

Speaking in representation of the developers, a lawyer said that Amazon would drop the project already under construction if the delay was granted.

The project is being built on land that Khoisan communities hold as sacred.

Several Khoisan groups have thrown their support behind the project, after the developers agreed to build a heritage, cultural and media centre that will be operated by indigenous groups.

Other groups however want the construction to be halted. For one of their representatives, the main issue is protecting traditional heritage.

"We will give not only this generation, but the seven generations into the future for which we are responsible, something tangible to hold onto in the process of finding the pathway to restoration, restitution and recognition of First Nations people", said Zenzile Khoisan, Chairman of the Western Cape First Nations Initiative.

Besides the rights of indigenous people, the court challenge also questions the environmental approvals obtained for the site.

"So in essence our argument is that the cultural heritage rights particularly of indigenous people are being infringed by this construction and that it ought to be stopped until such time as the court has decided on the validity of the authorisations which permit it", said Director Cormac Cullinan of Cullinan and Associates, Instructing Attorney Applicant.

Last year, city authorities approved the construction of a nine-storey business and residential complex on the site of a former golf course. 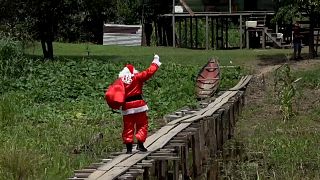