Guinea-Bissau trained in Garoua, Cameroon on Monday in preparation for their opening game of the Africa Cup of Nations.

Bissau kick off their campaign against Sudan on Tuesday.

The 'Djurtus' will be participating in a third consecutive AFCON, but they were eliminated at the group stage in 2017 and 2019.

Ahead of the tie, the national team coach revealed that six of his squad were ill with Covid-19.

"As you know, we are surrounded by this pandemic all around the planet and it knocked in our door, so we have six confirmed cases among players. If everything goes well hopefully the (final) test will come negative. Everything is possible but whatever happens Guinea-Bissau will continue working to achieve a positive result against Sudan," said Baciro Cande, the Guinea-Bissau head coach

After Tuesday's game at Roumde Adjia Stadium, Guinea Bissau will face Mo Salah's Egypt and then Nigeria - two nations that have won a combined ten AFCON titles - in their remaining group fixtures. 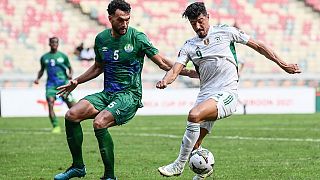