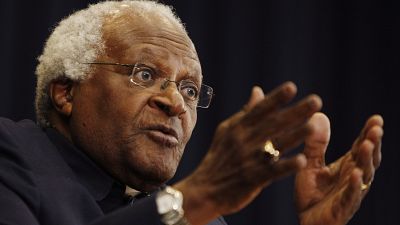 To every beginning, there is an end, and so is the life of Archbishop Desmond Tutu. For the sake of this piece, Africanews takes you on a journey of the life of the man who has made a global mark as the anti-apartheid hero and an advocate for equal human rights.

1931: Desmond Mpilo Tutu was born on October 7, 1931 in Klerksdorp, South Africa, about 170 kilometers west of Johannesburg. Tutu was born of Xhosa and Tswana parents and was educated in South African mission. His mother, Aletha, was a domestic worker; his father, Zachariah, taught at a Methodist school. The young Desmond was baptized a Methodist.

1943: Tutu and his entire family later joined the Anglican Church. When he was 12 the family moved to Johannesburg.

1947 **Desmond Tutu was diagnosed and hospitalized with tuberculosis. After his recovery, Desmond befriended a white priest, Rev. Trevor Huddleston, and served in his church.

He had aspirations of becoming a doctor after recovery, but that dream could not materialise since his parents could not afford the school fees. He changed plans to become a teacher studying at the Pretoria Bantu Normal College where he earned a bachelor’s degree from the University of South Africa.

1948: The white National Party launched apartheid in the run-up to 1948 national elections. It won popular support among white voters who wanted to maintain their dominance over the Black majority.

1958: He taught high school for three years but resigned to protest the Bantu Education Act, which lowered education standards for Black students. He then joined the priesthood.

1960: Tutu was ordained and served as a bishop of Lesotho between 1976 and 1978. He then became assistant bishop of Johannesburg and rector of a parish in Soweto.

1962: Tutu moved to Britain to study theology at King’s College London where he earned a bachelor of divinity degree and later became a fellow.

1966 Tutu went back to South Africa to start teaching theology at a seminary in the Eastern Cape. He also began making his views against apartheid known.

1972-1975: He served as associate director of the Theological Education Fund, traveling widely in Asia and Africa and administering scholarships for the World Council of Churches.

1975: Tutu was appointed the first Black Anglican dean of St. Mary's Cathedral in Johannesburg, south Africa and consecrated bishop of Lesotho the next year.

1978: He became the first Black general secretary of the South African Council of Churches, and began to establish the organization as a major force in the movement against apartheid.

1980: Tutu led a delegation of church leaders to meet Prime Minister PW Botha, advising him to end apartheid. Though the meeting did not yield any positive results, it left a mark in the book of history as the time is a Black leader confronts a senior white government official.

1984: The anti-apartheid icon was awarded the Nobel Peace Prize for his efforts to bring about the end of white minority rule. His voice was a powerful force for nonviolence in the anti-apartheid movement.

1****985: Tutu became the first Black bishop of Johannesburg. He publicly endorsed an economic boycott of South Africa and civil disobedience as a way to dismantle apartheid.

1986: Tutu becomes the first Black person appointed bishop of Cape Town and head of the Anglican Church of the Province of Southern Africa.

1991: Apartheid laws and racist restrictions were repealed and power-sharing talks started between the state and 16 anti-apartheid groups.

1994: After Mandela swings to power at the helm of the ANC in the country’s first democratic elections, Tutu coins the term “Rainbow Nation” to describe the coming together of various races in post-apartheid South Africa.

1994: Mandela appointed Tutu to chair the Truth and Reconciliation Commission that was being set up to “deal with what happened under apartheid” by investigating human rights violations, offering support to victims, and scrutinising applications for amnesty from perpetrators of past violations.

1996: Tutu retired from the church to focus solely on the commission. He continues his activism, advocating for equality and reconciliation and is later named Archbishop Emeritus.

1997 He was first diagnosed with prostate cancer and was hospitalized several times in the years since, amid recurring fears that the disease had spread.

2004 the archbishop accused President Thabo Mbeki, Mr. Mandela’s successor, of pursuing policies that enriched a tiny elite while “many, too many, of our people live in grueling, demeaning, dehumanizing poverty.”

2011 The Dalai Lama inaugurates the annual Desmond Tutu International Peace Lecture but does so via satellite link after the South African government denies the Tibetan spiritual leader a visa to attend.

2013 Tutu makes outspoken comments about the ANC. He says he will no longer vote for the party because it had done a bad job addressing inequality, violence, and corruption.

2013 Referred to by many as the “moral compass”, tutu declared his support for gay rights , saying he would not “worship a God who is homophobic”. 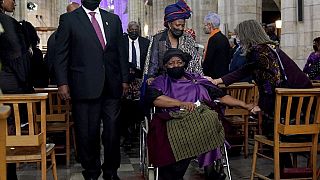 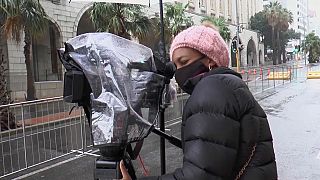