In Cape Town, in St George's Anglican Cathedral where a requiem mass was held in honour of Desmond Tutu after the national anthem, President Cyril Ramaphosa delivered the eulogy before handing over the nation's flag to the archbishop's widow.

"If Archbishop Desmond Tutu was here, he would have said 'hey, hey, why do you look so sad so unhappy'" he said.

South Africa paid tribute to its last great anti-apartheid hero, Desmond Tutu, in Cape Town on Saturday in a funeral that was not as lavish as he had wanted but was full of emotion and words recalling how the little man in the purple robe made history.

"The Archbishop was undoubtedly a crusader in the struggle for freedom, justice, equality and peace, not only in his native South Africa, but throughout the world. Such was Archbishop Emeritus Desmond Tutu's impact and influence that tributes have been paid by past and present presidents, religious leaders, monarchs, legislators, political parties, musicians, artists and ordinary people from all corners of the world," added President Cyril Ramaphosa.

Letsie III, the King of Lesotho, the representative of the Dalai Lama with whom Tutu exchanged memorable laughs, and former Irish President Mary Robinson were among the guests at the ceremony. Tutu had asked that the light pine coffin in which he lay for the last two days in the cathedral, for thousands to come and honour the memory of his struggles and enthusiasms, be chosen "as cheaply as possible".

No gold handles, just simple pieces of rope to carry it. On top, a simple bouquet of white flowers 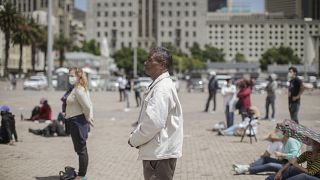 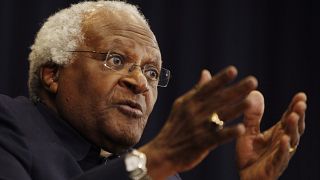