Breast cancer has killed 685,000 women worldwide in 2020, according to the World Health Organisation (WHO), pointing out late screening as one of the main contributing factors to the killer disease.

In Burundi, this center specializes in breast screening and receives samples from other hospitals.

"This year in 2021, until June, we have recorded 67 cases, 47 of which are pathological, with 70% of the population already treated," said Libere Nyabenda, head of staff at Bujapath

But if detected in time, the disease can be treated.

"Breast cancer is first discovered by the appearance of a small nodule in the breast. After the screening, it is confirmed by anatomical pathology. We then do what is called an extension of the disease which will allow us to observe if the disease is localized or if it has already spread to other organs. That is what we call metastasis. If the disease is localized, the therapeutic approach will be to first hold a multidisciplinary consultation meeting because this is a disease that calls on many specialties," said Dr. Desiré Nimubona, an Oncologist at Tanganyika Care Polyclinic.

On this day, the 19th of October which is also the breast cancer awareness month the occasion of world breast cancer day, dozens showed up for the screening.

"I had a breast cancer screening and the result was negative, but we must be aware of breast cancer," Daphrose Cimpaye said.

Breast cancer mainly affects women but a few cases have also been reported among men. 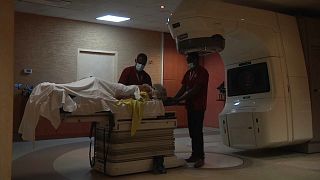