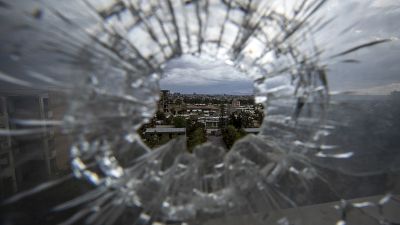 Ethiopian forces hit the Tigrayan capital of Mekele with air strikes on Monday, humanitarian officials and diplomats told AFP, in a new phase of the nearly year-long war in the country's north.

At least three people were killed and others injured, a hospital official told AFP.

"So far, many casualties are coming to Ayder. The deaths have reached three," Dr Hayelom Kebede, research director at Ayder Referral Hospital in Mekele, told AFP.

They are the first reported air raids in Mekele since the conflict erupted in November last year, although there have been others in the Tigray region.

"Air strike now in Mekele," one humanitarian official in the city said via SMS to AFP on condition of anonymity, describing attacks also confirmed by a second humanitarian source, two diplomats and a rebel spokesman.

The first air raid occurred in the morning on the outskirts of Mekele near a cement factory, the sources said.

The second took place around midday in the city centre near the Planet Hotel, often used by top officials from the Tigray People's Liberation Front, the region's former ruling party and the target of a government military operation since November 2020.

The TPLF said the aerial assaults were designed to inflict civilian casualties.

"Monday is market day in Mekelle & the intention is all too palpable," TPLF spokesman Getachew Reda said on Twitter.

Medical officials in Mekele could not immediately be reached to provide information on casualties.

The strikes come as the government appeared to be pursuing a new offensive in the war against the TPLF, which dominated national politics before Prime Minister Abiy Ahmed took office in 2018.

There were reports last week of fresh clashes between government and rebel forces in Afar, a region bordering Tigray, where fighting has also spread.