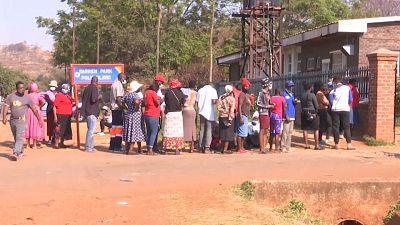 For months, Acholo Jani was told to get a COVID-19 vaccination because it might save his life.

He hesitated, fearful of potential side effects, but the moment he was told it would save his job, Jani got in line.

"I was supposed to be at work right now, but now I'm standing here in the queue but they are not serving me very fast," said Jani.

The 43-year-old mechanic's employer is among many in Zimbabwe mandating shots for their staff, including the government, which is requiring the vaccine for its 500,000 employees.

That sets the southern African nation apart from nearly every other on the continent, where the most immediate challenge is still simply acquiring enough doses.

Zimbabwe, by contrast, says it has ample supply for now, mostly purchased from China, but that hesitancy is holding back its campaign - a problem that has also troubled other African countries, partly driven by a general distrust of authorities.

Critics say that, unlike in richer countries that have made use of mandates, Zimbabwe's rollout isn't up to the task.

Vaccination centers sometimes run out of supply, and poor urban townships and rural areas have often been starved of doses in recent months.

What's more, they say, it's cruel to put at risk the livelihoods of people who are some of the world's most vulnerable and already suffering during the pandemic.

At Jani's workplace, a vaccination card, a pocket-sized booklet with the government's emblem on the front, is now "your gate pass," he said.

Jani eventually got his first shot - after joining the line at 5 a.m. and waiting for seven hours - but others were not so lucky.

Some waited hours on end only to be told the vaccination center was closing early because of limited supplies or a lack of staff.

People eligible for second shots have also complained of being turned away from centers giving preference to those seeking first doses.

A new batch of vaccines arrived recently, and lines appear to be shortening.

Around 15% of Zimbabwe's 15 million people are fully vaccinated - well above the overall African rate of 4% but far from the government's goal of 60%.