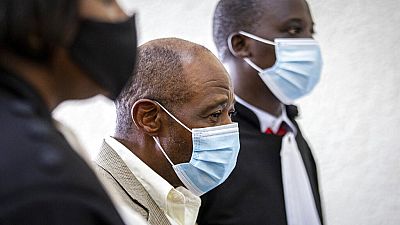 Rwandan prosecutors called Thursday for a life sentence for Paul Rusesabagina, the man who inspired the film "Hotel Rwanda," as he faces terrorism charges, while his family says he faces mistreatment and an unfair trial.

Paul Rusesabagina, once praised for saving hundreds of Tutsis from the 1994 Rwandan genocide as a hotel manager, faces charges related to attacks by an armed group inside Rwanda in 2018 and 2019.

The nine counts include "forming an irregular armed group," "belonging to a terrorist group" and "financing terrorism." Prosecutors seek to link him to activities that killed at least nine people.

Paul Rusesabagina, a Belgian citizen and U.S. resident, has denied the charges, saying his case is politically motivated in response to his criticism of Rwanda's longtime president, Paul Kagame.

He claims he was abducted last year while visiting Dubai and taken to Rwanda, where he was charged.

But a court ruled that he was not abducted when he was tricked into boarding a chartered flight.

The Rwandan government claimed that Paul Rusesabagina was traveling to Burundi to coordinate with armed groups based in that country and the Democratic Republic of Congo (DRC).

"My father Paul Rusesabagina is a political prisoner. He is accused of trumped up charges, and no evidence against him has been presented in the Rwandan court," tweeted his daughter Carina Kanimba after the prosecution requested a life sentence.

The family also claimed that Paul Rusesabagina had no access to food and water, which the Rwandan prison administration denied.

The case has received worldwide attention. This month, the Lantos Foundation for Human Rights and Justice said it had filed a formal request to the U.S. recommending sanctions against Rwandan Justice Minister Johnston Busingye and the head of Rwanda's Bureau of Investigation, Colonel Jeannot Ruhunga, for their role in his detention.