'Right moment': Scholar Mbembe on his role in France-Africa summit

The 63-year-old politics and history professor is a vocal critic of postcolonial relations and has previously accused Macron of "lacking imagination" in his political engagement with Africa.

Critics have long accused France of maintaining a patronizing and detrimental influence over its former African colonies, most of which are in the west of the continent.

While several French presidents have in the past declared the end of this relationship, dubbed "francafrique" by academics, they did little to reassure skeptics.

But the summit -- viewed by some as an embodiment of France's vested interests -- will have a new format this year.

The usual heads of state have not been invited. Instead, the event will be attended by civil society representatives from across the continent.

Mbembe, a fellow of the University of Witwatersrand in South Africa, has traveled to a dozen African countries since the start of the year to meet speakers and line up debates.

Discussion topics will be thorny, he told AFP during an interview at his Johannesburg home, citing French boots on the ground and West Africa's colonial-era CFA franc currency as examples.

Most of the questions raised with him over three months of travel revolved around what young Africans described as "tyrannies" supported by France, he noted.

French military involvement in Chad and Mali were recurring, passionate topics of conversation through which strong anti-French sentiment emerged.

"Many believe the time has come to end this type of attitude and invest in institutions, rather than continuing to think that only strongmen can maintain stability and security," Mbembe said.

Change will not happen "overnight", he added, but the summit could be the "first leg" of a long journey to refresh France's "damaged" relations with Africa over the next generations.

Macron is already seeking to boost his country's image, notably by paying more attention to anglophone African nations largely ignored by his predecessors.

The president last month paid a landmark visit to Rwanda during which he acknowledged France's complicity in the 1994 genocide of around 800,000 Tutsi people.

This was followed by a trip to South Africa where he pledged to invest in Covid-19 vaccine production on the continent and offered help to fight an insurgency in Mozambique.

"History was not written on the back of suspicion," he said. "You need to take risks".

"No one expected it to work," he noted. "That's how history is made."

Cameroonian writer Gaston Kelman said in a televised debate last month that Mbembe would have been better placed to advise his "own people" about how to deal with postcolonialism rather than the "master of postcolonialism" himself.

Senegal author Boubacar Boris Diop has meanwhile described his involvement in the summit as a "bad joke".

Mbembe has remained unfazed by his critics.

"President Macron has asked me to accompany him on his mission to strengthen relations between Africa and France," he said. "Why say no?"

The Africa-France Summit, postponed twice because of the pandemic, is now scheduled to take place in October in the French city of Montpellier.

Mbembe voiced confidence that the participating intellectuals, artists, and economists will come up with concrete proposals for a better future.

"It will be more than just ideas," he said. 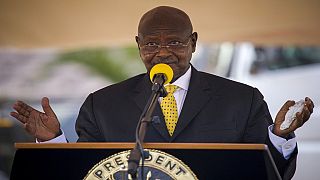