Why are protestors in Ethiopia and Mali waving Russian flags? 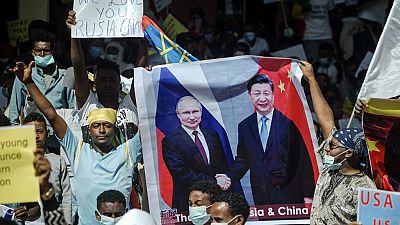 On Sunday, more than 10,000 people rallied in Ethiopia’s capital Addis Ababa to denounce the United States of America’s ‘meddling’ in the country’s affairs.

Last week, Washington announced sanctions on several Ethiopian and Eritrean officials over the conflict in the Tigray region.

“The part where protestors in Ethiopia mention is China is noteworthy because Beijing is a major player in Ethiopia’s economy, extending loans and building Special Economic Zones. They see China as an alternative,” argues Ovigwe Eguegu, a policy analyst based in Abuja, Nigeria.

Prime Minister Abiy Ahmed has courted Washington’s anger since rejecting a US-brokered agreement on the Nile dam and recently, over the war in Tigray.

It was the second time in three days that Russia, which had had a limited role in Africa until its 2017 intervention in the Central African Republic, was receiving favorable sentiments at a political rally in Africa.

On Thursday, protestors at a pro-army march in Bamako, Mali’s capital waved Russian flags as they showed support for Colonel Assimi Goita, who declared himself President after dismissing transitional leader Bah Ndaw.

They also waved placards denouncing former colonial ruler France, which maintains a sizeable military presence in the Sahel country beset by coups and a militant insurgency.

“There is a historical dimension to the detest for France in Mali and pretty much in the whole of West Africa,” said Eguegu.

"It starts from what people see as a stifling role played by France to the CFA Franc".

Public sentiment towards France has been hostile especially in the Sahel, something President Emmanuel Macron has repeatedly blamed on the region’s leaders.

“But the protestors also understand that Colonel Goita [Mali junta leader] lacks critical international support that he needs to hold onto power and cannot count on ECOWAS or Paris for backing. This is why Russia is brought into the picture,” Eguegu said.

The protest in Bamako was just the latest manifestation of a fierce tussle for influence in Central and West Africa between the two powers.

In December 2020, Facebook said it has pulled down more than 500 accounts, pages, and groups from Facebook and Instagram originating from Russia and France targeting 13 African countries, including Mali.

The other countries were the Central African Republic, Tunisia, Libya, Niger, Ivory Coast and Burkina Faso.

Facebook said at the time that the French disinformation accounts had ties to the military.

They would create misleading content targeting elections, and army operations and distribute it via social media.

Moscow, encouraged by its success and goodwill in the Central African Republic, has sought to further undercut France's already waning influence in West Africa.

In 2018, Russia sent military advisers and mercenaries to Bangui to train Central African soldiers and to protect top government officials.

The events have jolted Paris which is concerned about its waning influence in the troubled country.

But Eguegu says Mali’s junta is also being opportunistic.

“Malians understand that Russians and the French are rivals in the region. Malians see that and want to leverage on that rivalry and want to drag Russia into the mix so as to use its influence to ensure that Goita has that international clout that he so desperately needs to carry out his agenda”.