People displaced by fighting in northern Mozambique have spoken of the horrible conditions they have had to endure.

Cabo Delgado, in northern Mozambique, has been the scene of attacks over the past three and a half years that have killed more than 2,500 people and displaced 700,000 others, some of whom are temporarily housed in and around Pemba, either with family members or in transit camps.

According to the International Organization for Migration, the "25 de Junho" camp, the largest in Metuge, a town an hour's drive from Pemba, the provincial capital, is home to more than 30,000 people who fled the violence in the far north of Cabo Delgado.

After the attack on his village, Bilibiza, north of Pemba, in September 2020, Benjamim, who used to be a farmer and community leader, found himself in this camp with thousands of other people from his region.

Our living conditions," he says, "are not dignified. Our huts are precarious, we don't have enough canvas for the roof and as for the food that the World Food Program provides us, to prepare it, we need to find someone who would have a pot and this center is vast," he said.

With its small dwellings made of reed, straw, and canvas, this camp is intended to be a temporary shelter.

Ricardo Mendes Bau, also a former resident of Bilibiza, misses his former life: "In these huts, there are no beds or mattresses, and there are many insects that can transmit diseases. I was in Bilibiza, I had my business. They arrived, I was forced to leave, I could not take anything, everything was burned. Some people were left behind, my grandmother, my father fled to the islands, he died there," Bau recounts.

The interminable wait for rehousing

According to recent figures, the IOM is assisting a total of 900,000 people, including displaced persons from Cabo Delgado but also populations affected in 2019 by the passage of cyclones Idai and Kenneth, in the center and north of the country. Some are still waiting to be relocated. 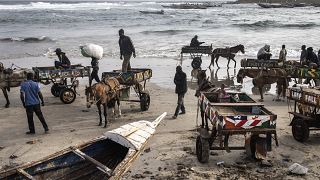